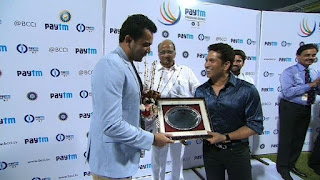 On the footprint of veteran Zaheer Khan's facilitation during fifth one day at Wankhede stadium, now BCCI wishes to facilitate most destructive batsman of India Virender Sehwag aka Viru who bid bye to international cricket few days ago. It may possible that 'Nawab of Najafgarh' to be get felicitated at Feroz Shah Kotla stadium, Delhi in 4th test which is going to play between India vs South Africa staring from 3rd Dec.
President of DDCA, Bansal also commented on it. He said "we have not received any imitation letter from BCCI yet. But, if it is expressed By BCCI then we must follow that".
There is also talk about a gate or stand  can be named after Viru at Feroz Shah. "Yes, the matter is under consideration" stated Mr. Bansal.
After retiring from international cricket, he played an outstanding innings of a hundred in Ranji match at Oddisa playing for Haryana Team. That too was on the occasion of Duserra. He joined retired cricketers league co-owned by Sachin Tendulkar.


Stick here yourself to get latest development about this news.
Posted by Unknown at 19:28:00