The Forthcoming Test match between India and New Zealand at Kanpur is the test match number 500th for Indian Cricket team. It took more than eight decades to India to achieve the milestone. Also, The first test host ground, Green park at Kanpur is set to host its 499th test. 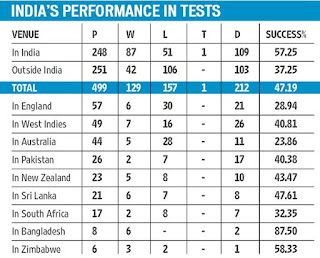 From 1932 to Sep 2016, a few major achievements of team India have been enumerated here. Where in 1932, India started to play test cricket. In 1999, veteran leg-spinner Anil Kumble who is now the chief coach of Indian team took 10 wickets in an innings with broken Jaw. In 2000, 'The wall' Rahul Dravid and wrist master VVS Laxman , together made a record shuttering partnership against Australia and Turbunator Harbhajan singh took a Hat-trick. In 2004, Sehwag best known for his attacking-batting-attitude, became the first Indian to make a triple century in a test and tagged as "Multan ka Sultan" after his compelling batting performance against Pakistan. In 2013, Master Blaster Sachin Tendulkar called it a day from Test cricket after playing 200 test matches. The 200th test was against West Indies and in 2016, India set to play 500th test.

If we talk about the Captaincy, Some stats about the Indian test captains, 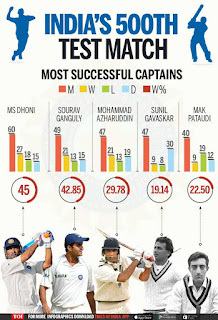 Moreover, to make the 500th test memorable, BCCI instructed the hotel in which both the teams stays  that it will serve 500 types of dishes to the players and management for all the five days according to the schedule.