Did you ever imagine team India playing without the World cup 2011 winning stars Yuvraj Singh, Virender Sehwag, Gautam Gambhir, Zaheer Khan, Harbhajan Singh or anyone of them ?
The answer may be in NO, But This is going to happen in World cup 2015. BCCI Selection committee kept emotions aside and excluded those from the world cup 2015 30's probables list which was announced on thrusday. We know very well that These have performed miracles for India and were also vital cogs in helping the side break a 28-year jinx to claim the ICC Cricket World Cup in 2011. At present, May be they are not at their best but it doesn't mean to keep them out of at least the probables list. 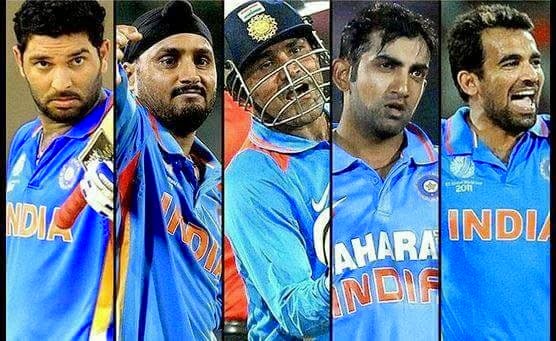 Yuvraj Singh :
A key player for team India who played very important role to bring T-20 world cup 2007, Chamipons trophy and World cup 2011. For his termendious performance in wold cup, he was named Man of the Tournament as he scored 362 runs ( 1 hundred and 4 fifties ) and took 15 wickets. Though he was critisized for slow batting in World T-20 2014, but you just can't ignore his ability and match-winning innings for Team India.

Virender Sehwag :
Two times (2008, 2009)  "Wisden Leading Cricketer in the world" award winner Viru is known for his fearless batting style. Bowlers of opposition team are already afraid when they see his name in playing XI. He is the 2nd batsman after Master Blaster Sachin to make a double century in one day international. Eventually this was happen on the very same day in 2011 against West Indies. But Selection board also ignored the ruthless batting of this batsman.

Gautam Gambhir :
This Opening batsman of team india will be remembered for his solid knock of 97 runs in the world cup final. He scored 393 runs in 9 matches of the world cup 2011. Due to his failure in recent England tour, Selectors decided to not mark his name in world cup probables. But he is doing good in Ranji matches.

Zaheer Khan :
This left-hand bowler is famous for his reverse swing. He gave Team India and its fans a lot of moments to rejoice by taking wickets whenever he has ball in his hand. King Khan of Indian cricket took 21 important wickets in 2011 world cup and help team to seal the World cup. But due to injuries and lack of his presence in ground, Selection committee ignored his name in world cup 2015 probable list.

Harbhajan Singh :
Knowing by "Turbonator", Harbhajan singh was also the part of winning squad of World cup 2011. He got 9 wickets in 9 matches during 2011 world cup. He was the one, who helped Mumbai Indians to win its first IPL. After that, his bowling performance was not good as expected from him as an international bowler. His last odi was in July 2011. Hence BCCI selection committee didn't consider him for world cup 2015.