Viru Called it a Day from Intl. Cricket 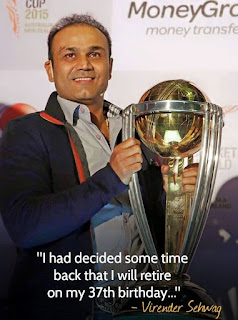 Been one of the biggest fear for the bowlers since 1999, Viru was continuously struggling with his eye sight since end of the 2011 world cup and therefore he was not been able to keep focus on cricket in the particular way which forced him to take this heartbreaking decision. He confirmed his retirement with a moving letter, says he was waiting for his birthday to retire and satisfied what he achieved.

The "Multan Ka Sultan" is best known for his unfettered approach right from the first ball of any innings towards every bowler around the world that made him totally different and unique from others. In his 16 years old noteworthy career span, he has entertained millions of cricket fans all around the world ever since his debut and tumbled down many records like plucking apples from an apple tree. 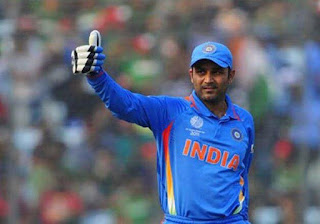 This swashbuckling opener made his FC cricket debut for Delhi in 1997-98 and later due to good performances in domestic cricket he called for U-19 team. He had a horrible ODI debut with only a single run in his account which was against Pakistan in 1999 as he entered in national team as an all-rounder. But his Test debut which was happened against Africa, became dream debut for him. He scored 105 runs in his first innings. Soon after his debut he became regular member of team India but sometimes his fearless approach and habit of given away his wicket kept him away from national team. He was also appointed as Captain and vice captain for national team on a few occasions. He was played for Leicestershire in english county and also a part of Delhi Daredevils and Kings XI Punjab in IPL & ICC cricket XI, Asian XI etc as well. 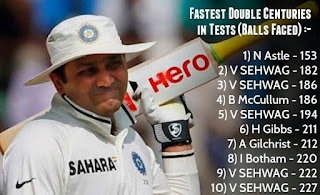 Quotes:
Here are some of the best quotes on India's irreplaceable opening batsmen-
♦ No matter how good and experienced you are, Virender Sehwag can kill your attitude - Brett Lee
♦ When Viv Richards retired I thought it was end of entertainment. But then came Virender Sehwag, the King of entertainment -Ramiz Raja
♦ I have to learn from Virender Sehwag how to play in the nervous 90s - Sachin Tendulkar
♦ I would always have Virender Sehwag in my team. I want to watch him bat but not bowl to him - Shane Warne
♦ A batsmen like Sehwag is never out of form - Michael Hussey
♦ Sehwag is the most unpredictable batsmen i have seen in my carrier- Glen Mcgrath
♦ Have to say Sehwag is the best player in the world to watch FEARLESS!- Michael Vaughan
♦ Having scored 298 and still hitting a six is something unimmaginable and you need to be a genius for that- Waquar Younis
♦ I'd swap everything I've done in my miserable little life to bat like Virender Sehwag - British Journalist Piers Morgan. 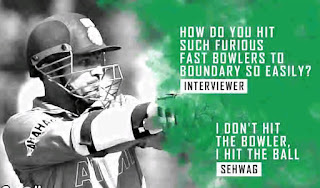 Achievements:
The Nawab of Najafgarh attracted lot of eye-balls for his ‘fearless’ brand of cricket And for that, he achieved lots of honor in form of affection and prizes as well.
Twitter  Reactions:
Here are reactions from His teammates, Opposition team members to Bollywood celebs.

"Virender Sehwag leaves his signature on the game with his tremendous achievements. Loved his instinctive approach to batting & life. Had the best seat during most of his superlative performances on field. Am sure Viru'll do much more to bring joy & smiles to our faces." - Sachin Tendulkar

"Pleasure to have played with you Sehwag bhai. What an amazing career. Thanks for the guidance and the memories. Modern day legend!" - Virat Kohli

"The legend I played with. The miracle I had the fortune of knowing. The most spectacular ever. Will miss u Virender Sehwag" - ImRaina

"Congrats bratha Virender Sehwag on a fabulous career. A pure entertainer who gave us sooo much joy. Thanks for all the gr8 memories. ‪#‎LEGEND‬" - VVS Laxman

"Viru paji u have been an inspiration to billion's of cricket fans across the world. Thanks for giving us all the joy while u batted. All the best for your future. #LEGEND ‪#‎respect‬" - Ajinkya Rahane
"Been a privilege to play with Sehwag bhai was a cricketing genius,a legend ‪#‎Thankyousehwag‬ for the memories.." - Amit Mishra

"Man who changed the perception of modern day batting. Never seen and will never see someone like him in future. Sheer pleasure viru bhai." - Rohit Sharma

"Clear thinking and entertainment were things he used as his weapon.A thorough entertainer,congrats on a wonderful career Virender Sehwag." - Ashwin Ravi

"Virender Sehwag, Partnerships will never be the same without you bro! Will miss you...India's greatest and the best opening batsman. Virender sehwag who forced manufacturers to come up with crowd helmets...and still never missed the singles. Will miss you from d other end." - Gautam Gambhir

"Well done on your career legend. Been a privilege to play with and against you. Catch up soon. Virender Sehwag!" - David Warner

"Will miss you on the field yaar Virender Sehwag. U r the gentlest coolest & bravest of sportsmen I have ever come across. Love & health to u" - Shah Rukh Khan

"Virender Sehwag Nobody batted like you at the top.Congrats on a great career. Great team. wishes to ur 2nd inngs." - Anil Kumble

"Didn't see Viv Richards bat in person but I can proudly say I have witnessed Virender Sehwag tearing apart the best bowling attacks. Talent in batting is one thing but to have the mindset of Virupa in batting is as close to impossible as it can get. We keep saying be positive, Look for a single but he was one person who was always looking for a boundary."- MS Dhoni

Wishing you the best with your retirement, legend - @virendersehwag! - KP

@virendersehwag Salute to a great legend and congrats on a great career sir .I wish u all the best for future. - Saina nehwal

@virendersehwag the best attitude to batting I came across. Loved watching the journey from way back in LA in '99 - gilly 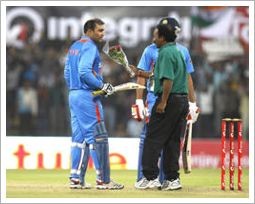 Million Mubaraks to @virendersehwag on a brilliant career full of runs, fans, & a legacy. Been a treat to watch #ThanksViru will miss you : Shoaib Malik

Thank you @virendersehwag for giving us millions of glorious moments on the cricket field. We will miss you. Have a great life ahead.:)- Anupam Kher

One of the best deal that I got in life was watching Virender Sehwag bat for free. #SehwagRetires- Manjrekar
I am the luckiest guy as I got to play with Sachin,Dravid,Ganguly,Kumble and Zaheer Khan: @virendersehwag
You can imagine his immense audacity with that whenever he en-route towards ground then opposition gets feared. It is to be said about him,  if they got him out within no time then you have already been gotten half of Indian team in  dugout but when it was his day then 'Rest You Know'. Though he is now retired from international cricket but still keen to play any kind of role in the cricket, the game which he loved the most. 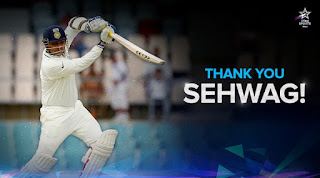 Take a bow, Virender Sehwag. You brought joy to cricket lovers around the world.
#ThankYouVIRU