When team India was playing its final ODI match of the Ind-NZ series on the eve of the biggest festival of Hindu nation, Deepawali, then everyone wanted that let India win this match and save its fortress against New Zealand at home. And happened the very same as India won the final ODI by 190 runs. 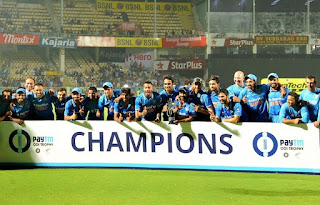 Summary of Vizag ODI:
After being reached on 2-2, the series now focused on FINAL ODI which had to play at the Eastern part of India, Vizag. Indian skipper MS Dhoni won the toss and elected to bat first with a change in his side as spinner Jayant Yadav made his  debut after receiving his ODI cap from Virender Sehwag. 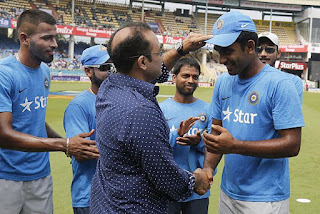 Indian team made an steady start but Rahane again failed to capitalize his innings. Well, Rohit who was looking just ordinary with the bat till now, was in different league today and scored 70 runs before getting caught out. Dhoni (41) joined Kohli to keep the momentum going on, later Kedar Jadhav,  a golden-hand player of the series joined  Kohli to drive India's score further. Playing a big shot , kohli caught out at covers on his personal score of 65. Axar patel and Jadhav ensured to reach at 269/6 after 50 overs. In reply to 270, NZ's counter attack packed by India's spinners. With the ball turning and gripping, India's spinners had a better day at vizag. Mishra ripped through the batting with a 5-fer as the Kiwis had no idea to counter his spin variations. In the end, it was a no-contest. And India won the match by a huge margin of 190 runs  TO SEAL THE SERIES 3-2.
Leg spinner Amit Mishra awarded as Man of the match and Man of the Series for giving his fittest match winning performance throughout the series. He says that he is happy to contribute to the team's victory.
Indian cricketers wore jerseys bearing their mother's names instead of their own in the final ODI against New Zealand at the ACA-VDCA Stadium, Vizag here on Saturday. 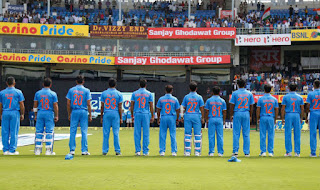 "Nayi Soch",  the first-of-its-kind initiative is part of a new campaign started by Star India in collaboration with BCCI to highlight the importance of mothers in our lives.

• 23.1 Overs in which New Zealand were bowled out. It was their shortest ODI innings .

• 4 Number of bilateral ODI series in which Kohli has scored 300 or more runs, which includes this series. It is the joint-most by any batsman. Rahul Dravid and Quinton de Kock have also amassed 300-plus runs in four bilateral series each.
• Kohli's 358 runs in this series are the third-most by any batsman in a bilateral series against New Zealand and the best for India against New Zealand.

The Kiwis have entertained for sure but India proved too good in the end.