India and England are going to play a crucial Test series beginning from November 9 in India which can prove to be another tough tour of the sub-continent for the English team. The english side is touring India after levelling the series by 1-1 against Bangladesh which they might soon want to be forgotten as their performance was proved disaster as they had too many loopholes in that series and now seeking to exhibit their winning-will. 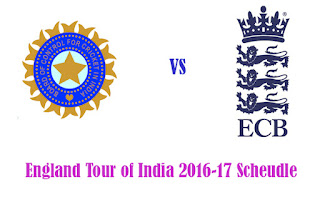 Whilst India, which has been blanked New Zealand 3-0 in a three-match Test series last month at their own soil, will be felt high on confidence and will look to continue their series winning form against a struggling England side to improve their points in the points table as currently INDIA are the No.1 test side.


Players to be watched out:
1.Kohli - Anderson:
Kohli , who is now leading Indian test side , has been become the backbone of the side for last 3-4 years no matter whether that is a test, ODI or T-20. There is no doubt that he is among the top five batsmen like Williamson (NZ), Joe Root(Eng), Hashim Amla(SA) and Smith(Aus) of the cricket world at the current time while Anderson has been established himself as a first key of the english pace attack over the years. So it will interesting to see them playing against each-other.
2. Ashwin - Root:
When Joe Root, who is currently the best batsman in the english side, will face the Indian spin attack warrior Ashwin who is recently completed his 200 test wickets then that will be a perfect moment to see the battle between the ball and bat.

"The Indian team is to be picked in Mumbai tomorrow," BCCI sources told PTI on Tuesday.

The forthcoming tour will start from November 9 at Rajkot and will end at Chennai. That will be a 5-matches test series and 3 ODIs and 3 T20Is later in the year.