His batting Style was completely different and unorthodox than others. That's why Sourav Ganguly, former captain of Indian side, said about him "He changed the definition of being an opener. " 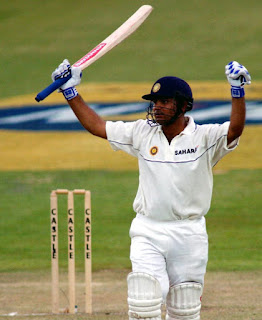 Here is talking about none other than the fear of the bowlers, Virender Sehwag, the man who revolutionised the role of the opener in Test cricket. He was made his test debut on the very same day in 2001 against South Africa where he was batted on number 6th position and blasted a hundred in the debut match, India were lost that match by 9 wickets though but they have been found an star in that match.

Although, Viru has already been made his ODI debut back in 1999. seeing his batting style, he was only kept considering as an one-day player but later, Soon he broke that myth. The then coach John Wright and Indian Skipper Sourav Ganguly promoted him as an opener and he also did not let them disappoint as he made a quick 84 runs at Lords in 2002. That Innings cleared his batting position in the team.

He is the only triple centurion in Tests for India having scored career-best knock of 319 against Pakistan & also one of those rare batsmen to have scored two triple ton with his next one (309) coming against South Africa.


Here are the three of his best innings in Test cricket:

309, Multan, 2004: At Multan on March 29, 2004 Nawab of Najafgarh became first India to ever score a triple century. He scored a marvelous 309 against arch rivals Pakistan to set up India's first Test win in Pakistan. It was this Test match which gave Sehwag the nick name 'Multan ka Sultan'. 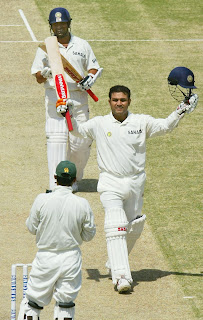 319, Chennai, 2008: With Virender Sehwag, it was all in or nothing. And he proved that against South Africa in Chennai on March 28, 2008 as he blasted the fastest Test triple-century, off 278 deliveries. Opposition coach Mickey Arthur termed it the 'best Test innings he has ever seen'. Crushing and grinding bowlers with his majestic batting it still remains the highest Test score by an Indian. 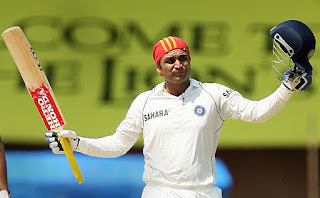 293, Mumbai, 2009: Sehwag who has scored and destroyed every bowler in the world tool the attack to the most successful Test bowler in this one -- Muttiah Muralitharan. Sehwag in this particular Test match had hit a total of 47 boundaries that included 40 fours and seven sixes. During this innings it broke a number of records - most double-centuries by an Indian, second-highest number of 250-plus scores and most runs by and Indian in a day. Victory also took India to No. 1 in the rankings. 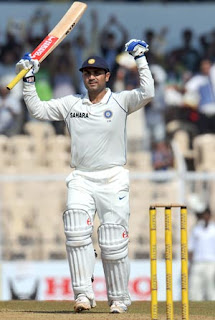 In a glorious intl. career spanning over 12 years, the swashbuckling opener played 104 tests scoring 8586 runs at an impressive average of just a little over 49, including 23 Centuries and 32 fifties.

Now a days, like his batting form, the stalwart is busy in showing his funny bones on the mic and is buzzing all around specially among his fans.

FINALLY, I would say, I don't think there will be another Virender Sehwag.