Any sporting record that lasts over 40 years has got to be very very special -- and the effort that equals it, or tops it, has to be applauded to the rooftops. 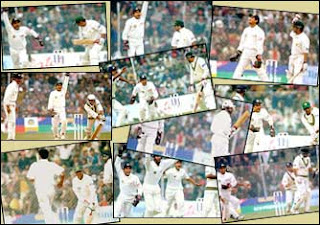 Today, it was Anil Kumble whose name rings from the rafters -- an analysis that reads 26.3-9-74-10 being the reason why.
On February 7, 1999, Anil Kumble took all the 10 Pakistan wickets in the second Test at the Feroz shah Kotla, in New Delhi and in the process he wrote his name into the annals of cricket folklore and history. Kumble emulated Englishman Jim Laker's feat, finishing with 10-74 from 26.3 overs against Pakistan. The feat was made all the more special since as it was against arch-rival Pakistan, and that too the Test series was the first on Indian soil between the two teams in 12 years. 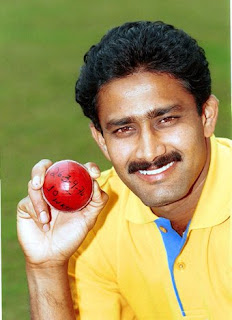 Kumble's brilliance saw India crush Pakistan by 212 runs in the second Test in New Delhi and square the short two-match series.
Posted by Unknown at 20:07:00