Team India ended their home season with a eight wicket series win over Australia at Dharamsala. Virat Kohli-led side beat New Zealand, England and Bangladesh before hosting Australia.
The Aussies are formidable opponents. They are proud and professional and they play hard. For the Aussies, only winning matters. Everything else is a waste of time. But this series saw a dramatic role reversal, with India trumping the Aussies. It’s been a fiery month, both on and off the field, it was produced riveting cricket, with players pushing the boundaries to get ahead of each other. In this tussle, harsh words were exchanged, allegations and accusations were hurled and charges were made, starting with the infamous Aussie Sikkper Smith's "Brain Fade" moment when he was seeking clue for DRS.

Kohli’s Indian team is more settled, sorted and successful than teams before it. The core group has excellent work ethic and on the bench sits genuine quality, ready to step in if an opportunity was to present itself.

India retained the ICC Test Championship mace and also won a cash award of USD one million for holding on to the top position in the Test Team rankings on the annual April 1 cut-off date.
At the end of what has been a gruelling season, it wouldn’t be wrong to say that Umesh Yadav has mastered the difficult skill of picking up wickets on sub-continent pitches. 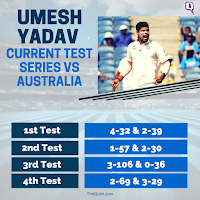 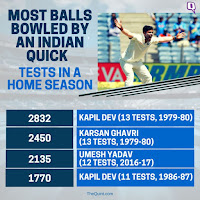 On a funny note, Virender Sehwag, who is also known for witty side, gave out the #ViruGhareluAwards. In his ‘awards’, he awarded following 'titles’ to players from both the Indian and Australian teams :