" Had Rahul Dravid  been born in any country other than India, he would have been much more famous than Sachin Tendulkar." - J kallis.
" I think you really won't find anybody playing with the same tactical virtuosity" — Gavaskar on Dravid.
" He is someone who is constantly in search of perfection." — Kumble.
" He will test your patience bit by bit until you forget your plan. " — Warne


This game is not about winning alone
It’s about a culture deep in your bone
Of how you play on and off the field
Of how you defend, how you appeal
Once played in villages, besides the farms
The game fell prey to gladiator charms
Runs flowed quick, with cash aplenty
as one-dayers sunk to Twenty20

Dravid bowed out of service after a career spanning 16 years. Though he will be remembered for his stone-solid defence till our memories with us. 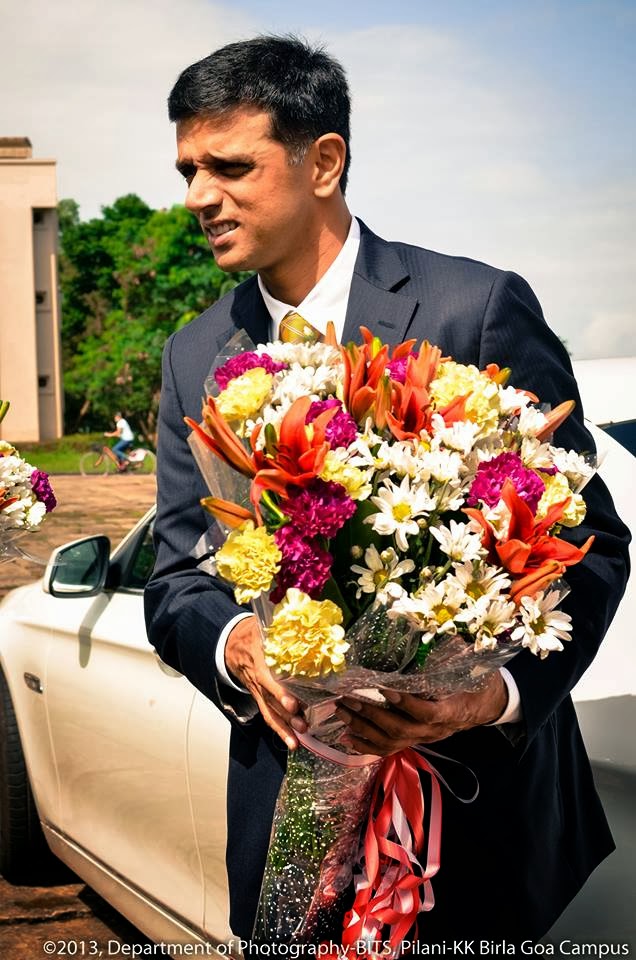 Who was know that a boy whose passion was hockey, will turn a great ambassador of cricket and ruled on Cricket n its fans through the years ? who was know he will lead Indian Cricket Team which is a almost dream for everyone who representing Team India ?
His fans Called him "The Wall" for his determination to stand like as the great wall of china and never let down whether the condition is not in his favour.
Whenever team in trouble , his team mates n million of fans called him to lift the team up and excatly that happen which they expected. though he did not get the fame as like Sachin, Dada, Sunil Gavaskar but probably  earned more respect than anyone else that every person want espically when he is representing a cricket team where Cricket is the biggest religion.
"


Some succeed because they are destined to, but Rahul Dravid succeeded because he was DETERMINED to       "


Here we talking about the Mr. Dependable of cricket , Rahul Dravid , the name itself says evrything.

He made a sparkling 95 on debut at Lord's in 1996 and till the last match did the same job and after a glorious career he retired on march 9, 2012 from test cricket.
In IPL, a t-20 format tournament  where he lead Royal challangers n Rajasthan Royals respectivly , won the disipline award while representing these teams, which  define that what did discipline matter in his life. 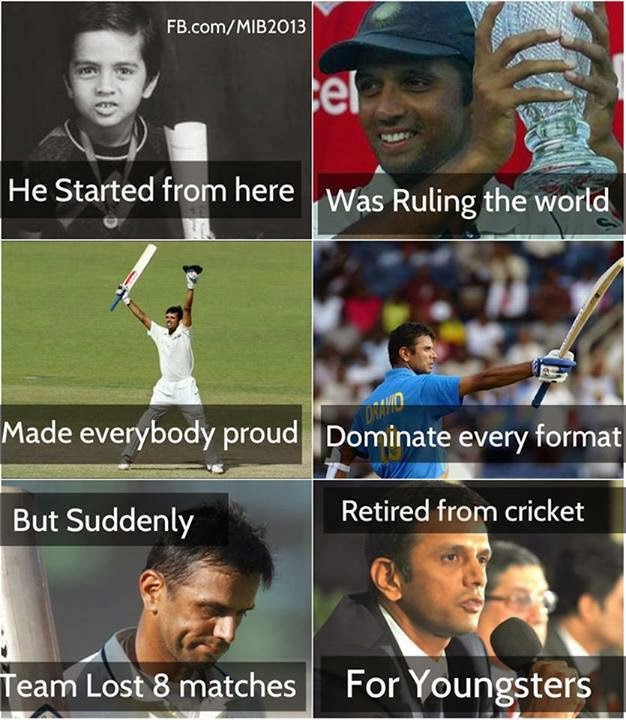 Even his humour is so elegant that you often wonder how seamlessly his class pervades into humour too. Dravid is the closest that one comes to the common man; understated and extremely hardworking. He reasserts that attitude is more important than talent at any point of time. He provides a spring board for people who want to succeed with the old school of thought for whom dignity and pride is more important than winning itself. In a generation and era where class, elegance and fortitude takes a back seat in comparison to brashness, controversy and fame, Rahul Dravid stands out as a beacon of light.
Even He handled his retirement announcement the same way he occupied the crease during many tense innings.
HUMILITY and HUMBLENESS can't get better than this! 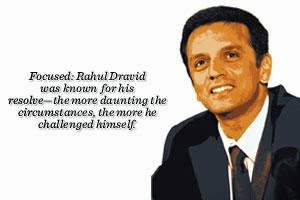 And so life moves on, though for those who follow Indian cricket passionately, it won’t be the same again after Dravid’s gone. I don’t mean to sound mushy: every player must retire at some stage, and as good, if not better players come along in time. But there are some who leave an indelible impression – on the sport as well as the minds of fans — which cannot be erased.
They stay long enough, and do so many wonderful things that they come to occupy considerable mind-space, in fact become part of your own identity. Rahul Dravid was one such. 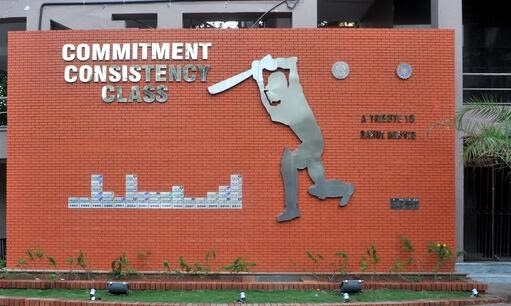 Some Stats of the Wall:
1. Dravid started playing cricket at the age of 12, and represented Karnataka at the under-15, under-17 and under-19 level.
2. he made his Ranji Trophy debut in February 1991 against Maharashtra in Pune, scoring 82 in a drawn match after batting in the No. 7 position.
3. he scored 95 on his Test debut against England at Lord's in June 1996
4. In 1996–97 tour of South Africa, He batted at No. 3 in the third Test in Johannesburg, scoring his maiden century with 148 and 81, en route to winning his first man of the match award.
5. Dravid scored his first ODI century (107) in the 1997 Independence Cup game against arch-rivals Pakistan in Chennai on 21 May 1997
6. Dravid was voted as the Pantaloon Cricketer of the Year (1996-97)
7. Third Indian batsman after Vijay Hazare and Sunil Gavaskar to score centuries in both innings of a match during the 1999 New Year's Test match against New Zealand with 190 and 103* to force a draw
8. Top scorer in 1999 World Cup, scoring 461 runs. He is the only Indian to score back-to-back centuries at the World Cup with 110 against Kenya and 145* against Sri Lanka
9. Scored his first double century in Test cricket, when he scored 200* against Zimbabwe at Delhi in November 2000
10. Dravid was named one of the top-five Wisden Cricketers of the Year in 2000
11. In the second match against Australia at Kolkata in 2001, Dravid and Laxman scripted one of the greatest comeback victories in the history. Dravid (180) and Laxman (281) added 376 runs for the fifth wicket in India's second innings, with the hosts following on.
12. In August 2002, against England at Leeds in the third Test match of the series, he scored 148 in the first innings to set up a famous Indian win. Named Player of the series (602) too.
13. On 4 May 2003, he married Vijeta Pendharkar. 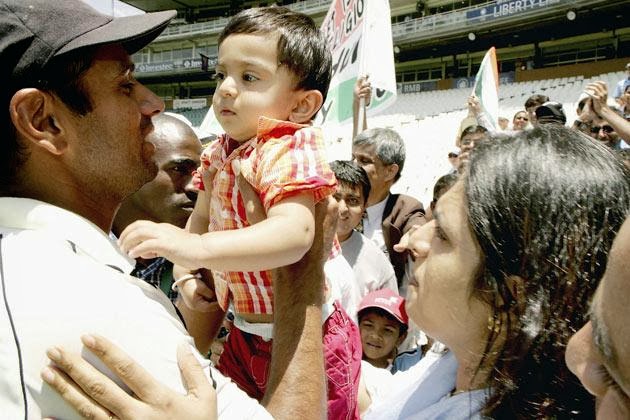 14. He was vice-captain during the 2003 World Cup and India finished runners up.
15. Scored the 2nd fastest half-century by an Indian in ODIs when he smashed a 22-ball 50 against New Zealand in Hyderabad on 15 November 2003.
16. In 2004, Dravid was awarded the Padma Shri by the Government of India.
17. Awarded with the ICC Player of the Year and the Test Player of the Year at the inaugural awards ceremony held in September 2004. 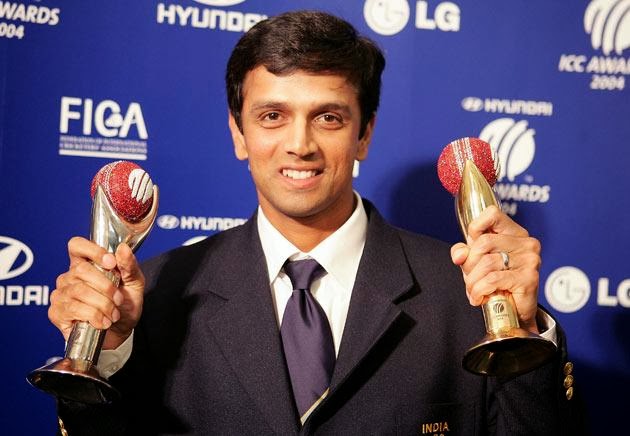 18. Appointed as the captain of the Indian team in October 2005 and resigned from the post in September 2007 after world cup existence.
19.  On 18 March 2006, Dravid played his 100th Test against England in Mumbai. 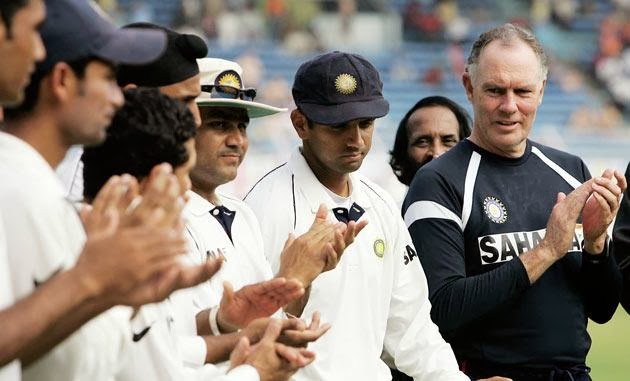 20. In 2006, ICC named him as the skipper of the World Test XI.
21. On 14 February 2007, he became the sixth player and the third Indian (after Sachin Tendulkar and Sourav Ganguly), to score 10,000 runs in ODIs.
22. When Dravid crossed 10,000 Test runs, a wall was built at his home ground – the Chinnaswamy stadium in Bangalore to commemorate the landmark. The wall contains 10,000 bricks, a silhouette of Dravid batting and the words ‘Commitment, Consistency, Class’ inscribed on it. The wall also has a digital run counter on it that keeps updating the number of Test runs Dravid has scored. 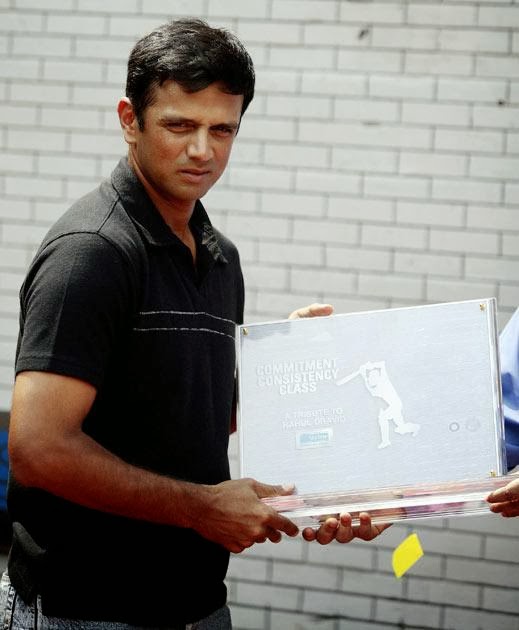 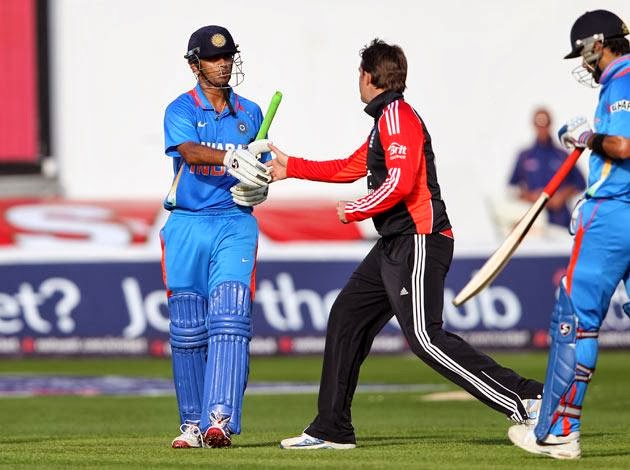 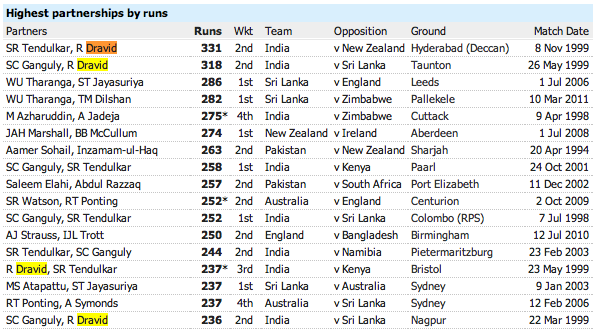 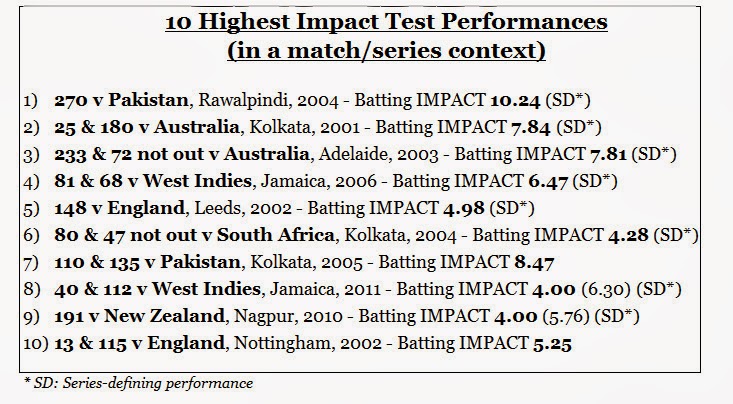 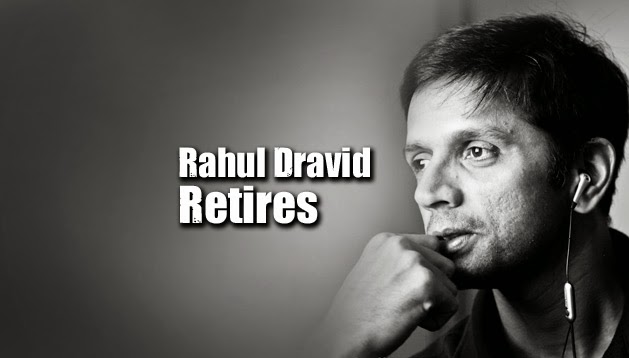 Thank you for the memories...


Of course, there are going to be countless words written on this great ambassador of cricket!
I would appreciate it if u share your thoughts with me